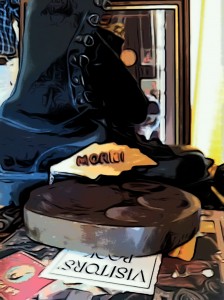 The obsession with Morni started as a simple desire to own a small house on the hills and to plant some trees. I had spent a year of my childhood at Shimla and ever since a house on the hills has been my concept of an ideal home. The laid back life on the hills is the closest one can get to paradise. The patter of rain on the green tin roof. The smell of moss on the rocks. The winding roads. The absence of traffic and the stink of the urban chaos. The clouds that swim into your homes. The simple hill folks. The quaint ‘tiki-samosa’ shops. The grazing goats on the idyllic hill sides. It’s no coincidence that all the sages and rishis of ancient India sought the refuge of the hills for quietude and for experiencing divinity. There is something about hills that brings calmness to the heart. The experience of being ‘in-sync’ with nature and God.

I grew up to find out that much of Shimla of my dreams had withered away with time. Furthermore, Himachal had closed its doors to ‘outsiders’. Owning a house on the hills was not a simple dream anymore. Maybe, it never was. Then, Morni happened. I got posted to Panchkula and got my first taste of Morni – low, crumbling hills with thorny scrub forests and no pines! It seemed a far cry from the majestic heights and thick deodar forests of Himachal. But, Morni grows on you. The scrub jungles have trees that adopt astonishing hues in autumn. The colourful Morni sunsets appear to have been painted on the sky. The commanding views of the plains below  give one the feel of a rajah surveying his territory from the high ramparts of a Rajasthan hill fortress. The whistling of the chil pines (that exist in pockets in the higher reaches). The colourful hill birds that draw the birders from Delhi on weekends. The melancholy fort of the Meers, that occupies the highest hill, brooding over its 300 years of chequered history. The fleeting sights of the barking deers and sambars, once mercilessly hunted. The reports of leapord sightings. The sparkling lakes. The watefalls during monsoons. The meandering ghaggar dividing the two hill ranges. The terraced fields that go golden with mustard in winters. The challenging trek routes and the biking tracks. There is no commercial traffic. No trucks. No smoke. The road to Morni takes you nowhere else. There is no money to be made. No room for the profiteers. But there is romance. There is peace.

As the idea of Morni grew in my heart, many tried to dissuade me from the ‘fool hardy’ venture. That Morni was no hill station. At 1100 metres it grew too warm in summers. That the hills were fragile and treacherous. That land holdings were fragmented and riddled with litigation. That the forest fires posed a routine threat. That there was no water. There was no phone. Electricity was erratic. And a million other reasons that I chose to ignore. All one needs to embark on a foolish journey is an equally foolish friend and a trusting wife. I am blessed with both.

Our modest cottage came up. So did the silver oaks and the pines. The resplendent bougainvillea soon provided a natural fence. Then we planted to our heart’s content. We planted mango, guava, chikoo, litchi, jackfruit, lemon, pipal, banayan, bamboo, amaltas, jacaranda, gulmohar, silk-cotton, auracaria, champa, bottle-brush, alstonia, rubber and palm! Even an Octopus Tree. The exotic allamanda flowers, rose bushes, juniper, raat-ki-rani, chandani, ivy and a hundred other colourful bushes and shrubs. The locals warned us that in Morni one is free to plant but a tree once planted cannot be cut. That the trees would eventually eclipse everything and their canopies would cast deep shade and would make the area dark and leave no view of the surrounding hills. But we went ahead, undeterred. Pruning and lopping of the naturally growing bahera, kasuri, amaltas, chal and chili trees by the locals was completely stopped and today the wilderness is slowly enveloping the patch of land that we call our own.

“Ishq janoon jab had se barh jayeh…” The cottage and its trees were only the beginning of the romance with Morni. The 19th Century British Gazetteers speak of British plans of undertaking plantations to stabilize the crumbling hills and to tame the wild seasonal rivulets that originate from the hills and flood the plains below. The hills and the forests, however, belonged to the Meers of Kotaha and this probably, deterred the British from planting the pines and the deodars as they did in Shimla, Mussoorie and Nanital. The Meers and the people of Morni, however, did preserve the forests and only a small part was cleared for cultivation. The lack of availability of water to sustain heavier cultivation also would have contributed to the preservation of forests. But today, active intervention is needed for some of the fragile areas. The heavy rains of 2010 caused havoc in the hills triggering numerous landslides and causing heavy erosion of soil cover. While our freshly wooded land held out, yet, hill slopes crumbled all around, losing the battle to the forces of nature. It became clear that we had to think beyond the tiny patch that we call our own.  That there was an urgent  need to do  something to save our heritage. A couple of hundred trees to augment the forest cover was the modest beginning. Friends in the forest department recommend introduction of vetiver grass to stabilize the slopes. Sourcing the saplings proves to be a challenge thus far. An encouraging development has been a young sarpanch of one of the bhoj’s of Morni who has taken to planting. He agrees that the hills are of no worth without the green cover and has vowed to plant all along the village tracks. Forest fires, however, remain a major challenge and only the hardy pines seem to be able to withstand the same. A fire ravaged the beautiful row of silver oaks planted by the forest department near the tals.

Why this website? I felt that the hills needed their story to be told by someone. Something about the history of the fort, the ancient temples, the lakes and the bhojs. A study of the forest wealth of the hills. A compilation of the huge work done by amateur birders in compiling lists and photographs of the birds that visit the hills. To bring out something about the wildlife. The tigers for which the hills were once famous. The leopards that still inspire fear.  To write about the small resorts and dhabas that dot the hill roads. The work being done on conservation. The culture of people of Morni. Something about the people who have built cute cottages and have settled here. The trek routes to different scenic destinations. The view-points for photography. Important information for emergencies. This and much more.  Effort is being made to rope in people with the same love for Morni hills and also expertise in different areas to write about the hills. A website is less ambitious and more dynamic than a book. Also,  it allows everybody to participate. The site is hosted by a friend who also provides latest word-press themes, plug-ins and training sessions to make the site more interesting and informative.

‘Why don’t you take this further and come out with a full-fledged book on the History of Morni? asked Czarevna, my elder one, as she helped me with a web post.
‘Why don’t you do it?’ I quipped.
A Tramp is an explorer at heart. A restless one. Things do interest you. For a while. And then you lumber on to some other untrodden path. Once it really gets to you, Tramping is compulsive!
And this was supposed to be a hobby. That was the whole big idea! Bringing out a book is serious business. Agreed that the father-daughter duo had dug up some interesting nuggets of history. But the journey had barely started. A book would need a lot more research. Plus tedious compilation and editing. I was not quite up to the task.
‘Maybe I could initially work on a Monograph,’ she mused. And I knew that she had just gone ‘down-the-rabbit-hole!’ Her journey had begun. The Hill Kingdom of Morni had found a new Princess! Let’s see how she tells its story.