It was on 2nd of May, 1926 when ‘Jim’ Corbett finally nailed the notorious man-eating leopard that had terrorized travelers and villagers on the pilgrim road to Badrinath/ Kedarnath for 8 long years – claiming 125 victims. The leopard showed exceptional cunning in evading traps, poisoned baits and the bullets of shikaris and bounty hunters. Its depradations found echo in the British Parliament and was believed to be possessed by an evil spirit by the superstitious hill people. The Tramp chanced upon a newsreport that was published some six months after Corbett shot the ‘fiend’ and is reproducing the same for his readers:

There was recently shot by Captain Corbett, of the Indian Army, a giant man-eating leopard, which for eight years had terrorised 350 square miles of Northern India, and had killed in that time no fewer than 125 human beings.

It was in the tiny village of Rudraprayag, in Western Garhwal, near the Himalayan Mountains that the man-eater was first seen.

A village woman woke, shivering, to see the brute back slowly out of her hut. When she and her husband had overcome their fright enough to light a rush lamp, they found their seven-year-old boy gone. They had caught only a glimpse of the leopard, but it was enough to mark him as a man-eater.

Rarely do leopards carry of their prey, for the simple reason that they are not big enough, unless the prey is a child.

But this beast was huge, especially for a hill leopard, and invariably he dragged off his prey, alive or dead, to feast upon it in the jungle. The best village hunters followed the trail as far as they could but always it disappeared.

Rudraprayag will never forget that summer in 1918. Despite the withering heat, all doors were barricaded at sundown. Sleep was unthinkable, until, sometime before dawn, screams would herald the kill. Then the luckier ones would stifle a few hours more, thankfully, until daylight brought release.

The priests made charms and prayed, that the Scourge be taken from them. Hunters from other villages came, set traps for the killer, laid in wait for him, put poison in tit-bits left on the edge of the jungle. Nothing availed.

The priests prepared sacrifices to the goddess Kali, who is the Indian deity of death. It is she who is supposed to send pestilence and plagues into the villages. Surely if there was ever a pestilence, this leopard was one, and so Kali might be induced to send him away. Goats and sheep were lifted up to the top of tall poles and there left slowly to die. But the sacrifices were as ineffective as the drums, the traps, and the charms.

At last the priests said that the leopard was the incarnation of some robber, some ravager of long ago. He sought human lives not alone for food, but because of dimly remembered human desires, and he would continue to seek them until those desires were sated. So they determined that the choicest maiden of the village should be offered the leopard, and her entreaties to the contrary were of no avail. A dead-fall was constructed—three huge spiked logs propped against a tree, their lower ends resting on a stick. The least pressure on the stick, and the logs would drop. It was a trap into which they hoped the, leopard would fall and the maiden be saved.

Just at sundown the girl was led, with all ceremony, to the tree, to which she was lightly bound. This would give her a chance of escape if the unforeseen happened. Far into the night the priests chanted and the young men watched. Only the usual jungle sounds and the whimpers of the girl broke the stillness. Then came a soft rustle. It was the leopard, pausing on the edge of the jungle. For a long time he waited, until when the moon rose; the young men could see him, a blur in the grass.

He stalked out, lithe, silent. Straight to the tree and the girl he went. Not three feet, from the trigger of the dead-fall he crouched, and his tail waved in anger. He had discovered the trap. He disappeared. Suddenly the leaves parted and the tethered girl stared straight into the eyes of an immense leopard. It was the Scourge which had detected and evaded the trap set for it beside the sacrifice, and had appeared at the one spot where it could move safely. As she shrank with terror against the tree, it seemed to look at her contemptuously—and then swiftly it swept a paw down over her face and breast as though to mark her for his own, and, turning, disappeared in the jungle.

When dawn broke, the watchers mustered up courage to approach the maiden. There was blood around her, but not a bone –was broken. But from the forehead straight down her face were three deep furrows. The leopard had marked her for life.

Thereafter the leopard disappeared from Rudraprayag, but not from the hill country. For miles around he ranged, striking down men and women whenever he came across them, sometimes in the daylight. Finally the Government took action. Sixteen picked shikaris—expert trackers and hunters—were paid to go after the leopard. They were promised a – greater reward if they slew him. For months they pursued him. Once he was caught in a trap, but freed himself before the shikaris arrived. Another time they drove him into a cave, but he fought his way to freedom, clawing up several of the shikaris who were too slow to get out of the way.

Then Captain Corbett took up the hunt. For a month he and A. W. Ibbotson, Deputy Commissioner of Garhwal, stalked the leopard, but he evaded them. During the month they came almost to believe with the natives that the leopard was possessed with a human spirit. He avoided gun-traps, gin-traps, and poison with an intelligence that was almost human. The more he was hunted, the more wary he became.

Sometime later Captain Corbett established himself in the rest-house at Rudraprayag and re-opened the campaign against the leopard. For several months he carried out experiments with patent traps, gun-traps, flashlights, and poisons. And during this time the leopard, as if to taunt him, returned to Rudraprayag for his hunting.

Early in April he carried-off a young boy. Six days later he carried off an 85-year-old woman from a village near Rudraprayag, and partially ate her. A week later he took another boy from Rudraprayag.

Captain Corbett came upon one of these bodies, partially devoured. The captain poisoned the body and Iay in wait. Sure enough, the leopard returned and began to eat. But he ate only the un-poisoned portions of the corpse! Captain Corbett was not near enough for a shot.

He was tracked after his next kill—getting careless, evidently. Two rifles were lashed to a tree, aimed at the corpse. Fishing- lines joined their triggers to it. The leopard would shoot himself, the captain thought. Of course, if he moved the body toward the rifles, instead of away from them, the guns would not go off until the leopard was behind them. To avoid this, bushes were thrust firmly into the ground between the corpse and the rifles. Unbelievable though it may seem, the leopard first pulled up the bushes, dropped them some distance from the trap, and then came back to the corpse and dragged it toward the rifles. Not until the lines came taut around the tree did the rifles go off, and -then, of course, the leopard was behind.

Startled, he sprang directly into a 7 feet gin-trap. But when Corbett and Ibbotson came up there was nothing in the trap but a tuft of hair.

Then the Captain decided to sit up for the leopard near Golabrai chatti—a grass shelter for pilgrims, half a mile from Rudraprayag on the pilgrim road.

For 10 nights he sat in a machan, or hunting platform, in a tree. On the road below was a goat with a bell round its neck. There was no sign of the animal for the 10 nights, but the captain decided to try one night more.

On the 11th night, about 10 o’clock, the Captain heard something rush down the road, and the goat bell tinkled. Looking down, he saw a blur, and at this he aimed his rifle. He switched on his torch. Through sheer luck he had drawn a bead on the leopard! He fired. The animal bounded away. The moonlight showed no sign of it. The Captain did not know whether he had scored a hit or not. But at daybreak he found blood tracks, and these led him to hole in which the dead leopard had fallen. 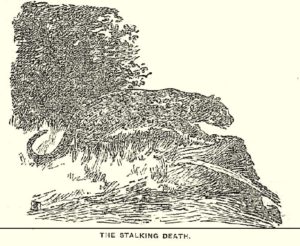 There was no doubt that it was the Scourge. All its kills had shown three teeth marks instead of four. The dead leopard lacked a tooth. The girl offered as a propitiatory sacrifice had been scored with three claws. The dead animal lacked a claw and there was a tuft of hair missing from a hind leg, where the captain’s trap had almost held it.

And its length was exceptional. Seven feet ten inches it measured, even after it had been dead all night and shrunk a bit.

But its last human kill was its hundred and twenty-fifth, and no white man can ever persuade the people of Garhwal that the Scourge was not possessed of a demon.

Corbett published his account of the hunt of the man-eating leopard in his book, ‘The Man-Eating Leopard of Rudraprayag’ in 1947 at the age of 72, some 21 years after he shot the animal. This account has no mention of the leopard having clawed but otherwise spared a ‘human offering’. The newsreport that was published 6 months after the man-eater was shot accurately describes the length of the leopard, its injuries and other details. It attributes the three-claw scarring of the village girl offered as bait to the leopard to its missing fourth claw. As per Corbett’s account it was the left hind foot that had an old bullet wound and a missing claw. It seems unlikely, however, that the leopard would have inflicted an injury with its hind-paw unless it was accidental. Did Corbett miss a detail/ confuse the injury or was the story of a human offering purely a reporter’s embellishment of the account?