Indian Flying Fox/ Greater Indian Fruit Bat (Pteropus giganteus) is a very large bat of the forests that typically lives in colonies close to a large water body. The bat weighs around 2 Kgs, is over a foot in length and its wing span can exceed 4 feet making it very conspicous in flight. The ears are pointy and the nose is black, thin and elongated. The body has a rufous/ reddish-brown coloured fur and wings are black and leathery. The bat has a musky odour. The eyes are large and the bat has excellent vision. This nocturnal bat wraps itself in its wings like a cape (for warmth and protection) as it rests/ sleeps hanging upside down by the powerful claws of the hind feet. The bark of the tree can get damaged with the sharp claws of the bat. Large colonies of bats roost in camps during the day time. The dominant males get the best roosting sites in the camp. The bats will chatter and squawk loudly if threatened by an approaching stranger.   It leaves its roost after sunset to feed on nectar (extracted with their long tongues) and fruits like mango, fig, guava, neem and banana (chewed with their strong molars) and can be destructive for orchards and vineyards. The bat generally swallows the juice, spitting out the pulp and the seeds!! It helps to pollinate flowers and distribute seeds.

The flying fox does not find its way by sound (echolocation) and rather depends on its excellent vision and smell.  The hearing ability of the flying fox is is also sharp.

It mates on the roosting site from July to October and the young are born ‘live’ emerging feet first with eyes open! They are tended by females for 5-8 months and the ‘infant’ clings to the mother even in flight when she flies from the roost to find food. The flying fox is also a strong swimmer!! The large wings work as flippers while swimming.

The flying fox is considered sacred in southern India, but is hunted in other parts as a source of protein and for fat which is believed by some to have medicinal uses.

Incredibly, this lovely fox-like bat is placed in Schedule V of the The Wildlife Protection Act, 1972, that is, it is treated as vermin alongwith rats, mice and crows! 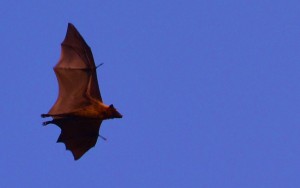