Barking deer/ Common or Indian Muntjac/ Kakar is one of the smallest deer (about 2′ at the shoulder) with a long and flexible body and very short legs. Body is golden-brown, lower parts are creamy-white including upper portion of its long tail that is carried erect when the deer is running. A glimpse of the tail is all that one manages as the deer melts into the surrounding shrubs.

The face is dark brown with a large ‘V’ formed by folds of skin that gets accentuated by streaks of black hair above the eye-brows covering the prominent ridges of bone that merge with the short horns that curve backwards and are shaped like hooks or claws. Females have only bony knobs in place of the horns. 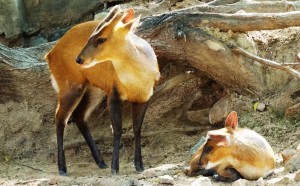 The male has short but vicious tusks/ canines in the upper jaw with which it will fight off a foe when cornered. The deer licks its face with its extra long tongue that produces a curious rattle when the deer runs. The hoofs are upright and the deer walks and runs daintily with a spring. The head is lowered while running.

The hoarse, resonant bark is frequently heard in early morning or evening or when the animal is alarmed. It will sometimes give away its position by letting out a bark at short intervals sometimes for as long as an hour. The deer remains in dense cover or at the fringe of dense shrub cover but can be spotted drinking water at watering holes in hot summers. The deer is found in scrub forests and hilly slopes. It is present in reasonable numbers in Morni hills and its characteristic loud bark can be frequently heard in this area. The author has prepared this video of the Barking deer in the forest near Mandhna that falls within the Khol-Hai-Raitan Wildlife Sanctuary.

Males are solitary and territorial and scent mark their territory. The females also move alone, barring the reproduction season.