Potato tree (Solanum verbascifolium) is a widespread weed of the tropics that originated from the Central American region. The shrub can grow up to 4 to 10 metres tall. A toxic plant that is used to prepare formulations that are used as diuretics and purgatives for treating malaria, leprosy and venereal diseases and for stimulating the liver functions.

Stem is unarmed, woolly and can grow up to 20 cm thick in diameter. 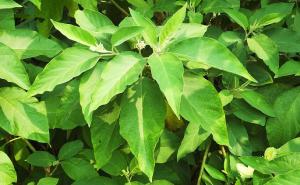 Flowers are white in colour, 1.5 cm in diameter and grow in terminal cymes. 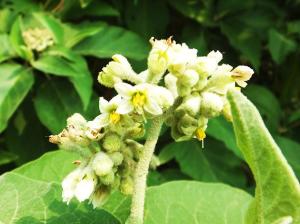 The berry-like globose fruit that turns dull yellow/orange on ripening is considered poisonous and causes nausea, headache and cramps. The fruits were used as an ingredient in preparing arrow poison. Yet the fruit is reportedly eaten in some cultures and is used for preparing curry in South India! Seeds are ovoid, compressed, 1–2 mm in diameter.
The velvety leaves are used to remove grease from dishes. Leaves are pounded to prepare a poultice for treating haemorrhoids. A decoction of the leaves is drunk for treating vertigo, dysentery, diarrhoea and fever.

The root bark is used to treat arthritis.

The plant is generally considered a weed but is grown as a shade plant for coffee in some African countries and also as an ornamental plant.
References: