As one cautiously descends the steep hill road from Morni to the twin tals (lakes) in the ‘Valley of  Tikkar’, one first reaches the smaller of the two lakes that has been named ‘Badah’  (large) tal, for some curious reason. The valley as seen from atop the Gajan hill to its north resembles a large bowl, with the green meadows and the sparkling lakes surrounded by hills on all sides. The tals (lakes) are fed by the run-off from the surrounding hills and remain full to the brim for most part of the year. The lakes overflow during the rains and the water spills over into a choe that cuts through the hills and falls sharply to the south to join the tempestuous Dangri nadi. As per folklore, the twin lakes are connected by an underground channel that keeps the water level the same in the sister lakes.
A small, unpretentious, cottage hotel has recently come up by the southern bank of the Badah tal. The name ‘Lakeside Cafe’ not only makes a direct reference to the hotel’s USP, its wonderful location, but is also suited to its no-frills but tasteful character. The cafe area consists of a spacious tiled hall with large glass windows facing the lakeside. A staircase leads to the brick-paved roof-top terrace with a clear unbroken view of the lake and the hills beyond. The owner has added a series of broad, grass covered stepped-terraces overlooking the lake. These lakeside terraces are ideal for lounging on your lavish deck chair under the brightly-coloured sun umbrella and for doing all that idle reading that you somehow could not find time for. You could even smuggle in your angling rod and risk catching a catla or a mrigal. It’s a ‘risk’ because the fishing rights are auctioned every five years to a fishing contractor and no angling licences are given out by the fisheries department. But then the distant contractor is unlikely to grudge you a fish or two, if one were to presume for argument’s sake that you could actually manage to land one! The cafe is kept spick-and-span by the enthusiastic Garhwali cook-cum-caretaker who is all too keen to please. The vegetables are farm fresh, grown on an adjoining field. The room tariffs are affordable and there is ample space for parking. On the whole, the place is modest but the dream that inspires it is definitely beautiful.
As you lean across the terrace railings to peer at the scenery beyond, the romantic in you can’t help but wish that if only the lake waters were a clear Alpine blue. If only that backdrop was of  dense conifer forests with distant alpine meadows and snow-capped peaks. If only the cows that grazed the grassy banks were the healthy ‘Swiss Browns’ with the music of their traditional Treicheln bells filling the  fragrant mountain air. If only one were to be received by that charming Swiss hostess in her traditional embroidered skirt and blouse in gay floral colours. If only this were that quaint lakeside resort in the Bernese Oberland, by the bank of the Brienz! Alas!!  The waters are the turbid Shivalik brown. The red-clay hills are sparsely wooded. The ‘pahari’ cows are of an emaciated and nondescript variety. The caretaker is the everyday Garhwali that you generally encounter at such-like garden cafes on lakes like the Badah tal! But don’t loose heart. With a little imagination you will not be disappointed still!
The area has the rugged charm of the Shivaliks. The tal’s waters are muddy but as per tradition this is the mythical ‘Lake of Death’ where the Pandav prince Yudhistra successfully answered the tricky questions of the Yaksha to save his brothers from certain death. And before you decide to dismiss the tale as local yarn, you are advised to take a walk to the lakeside Thakur-dwar temple. The verandah of this modest, white-washed shrine is adorned by 1000 year old Pratihara sculptures that were excavated at the site sometime in the 70s. The forests around may lack the majesty of the Alpine conifers yet they reveal a diversity that takes a trained botanist to comprehend.You could ignore the cows and focus on the amazingly rich bird life of Morni. The Blue-Magpies, the White-throated Kingfishers, the White-capped River Redstarts, the Flamebacks and the Paradise birds. An early riser may be rewarded with a Sambar Stag grazing in the cafe’s garden or a Barking deer scampering up the far slope with its quaint upright white tail. And if you are the beloved of the Gods, you may actually get a chance to spot a leopard in the wild. 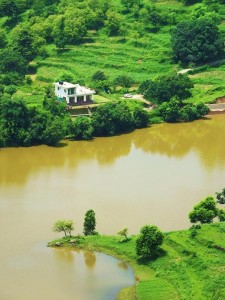 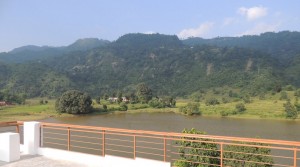 View from the rooftop terrace of the Lakeside Cafe, Morni hills 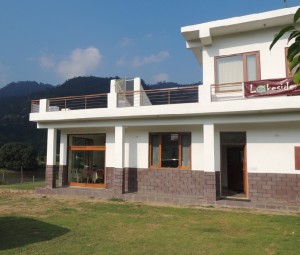