The Adventure Park at Morni was set up at a cost of Rs. 1 Crore by the Haryana Tourism Department in the Valley of Tikkar and was inaugurated in October 2004 by the then Chief Minister of Haryana. The park was set up on the heavily wooded hill that separates the twin lakes of Tikkar. The architecture and layout was conceived by the students of the College of Architecture and the College of Art at Chandigarh. The park was part of the larger game-plan to introduce outdoor activities and adventure sports to Morni hills. The park offered a series of rope obstacles such as the spider’s web, river crossing, Tarzan’s swing, the Burma Bridge etc. A rock-climbing wall with grips for practicing climbing and a short vertical drop for rappelling were the other outdoor activities. Kayaking and angling were to be introduced in the adjoining Tikkar tal. Open-air lakeside camping with evening bonfires was planned. There were plans to introduce biking and para-sailing as well. It was hoped that the adventure activities would attract groups from large corporates and educational institutions in the region and would provide the much needed fillip to the tourism potential of the picturesque hills of Morni.

Even though the plan looked good on the drawing board, yet it did not quite take off as intended. The students gave a curious flavour to the architecture of the park that was not consistent with the general theme of adventure. The park thus came up as a curious mix of a kiddie amusement park (complete with a House of Horror with fibre glass mummies) and an outdoor activity area that was a virtual rip-off from a regular commando-training obstacle course. The park, however, initially did manage an impressive footfall until the fixtures fell into a state of disrepair like most Government-run initiatives.

The Haryana Tourism Department has, however, recently handed over the facility for operation and maintenance to a Chandigarh-based adventure enthusiast and entrepreneur and it is hoped that the park and its visitors will finally get a taste of some real adventure activity. The new outfit has effected repairs of the rope obstacles and is in the process of planning new activities like nature walks and biking in the area.

The Tramp visited the park recently to review the progress. One enters the park through an arched gateway and reaches the ‘Toadstool’ reception building that seems to have been lifted right out of Enid Blyton’s, Adventures of Noddy. 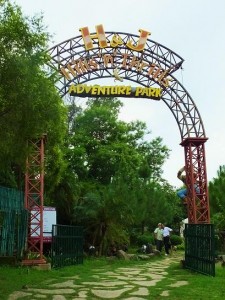 Arched-Gateway to the Adventure Park Toadstool entry to the Park

The inaugural board has been prepared in relief and is almost as astounding as the original name of the park – ‘Hosh & Josh, Hills n Thrills, Adventure Park!!’ The curious inaugural board

One then enters the beautiful, lush green interiors of the park. There are a number of grassed terraces that house the numerous rope obstacles and the swings. Unusual swings at the park 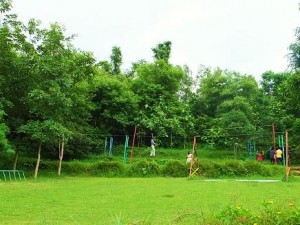 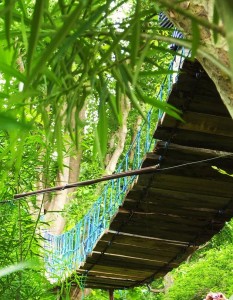 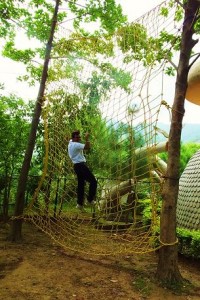 A quaint hut-shaped structure houses the cafeteria that is operated by the adjoining Lake-side Cafe. 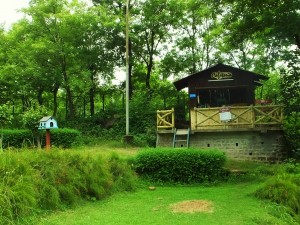 The flowers of the park deserve a special mention. The dainty pink rain-lilies and yellow creeping daisies, the deep red hibiscus and the flaming firecrackers sprinkle colour all over the lush-green environs and make the atmosphere cheerful and picnic-y. 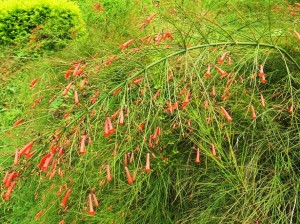 Fire crackers at the Adventure Park

The park offers numerous pathways running in different directions and cement structures that can be ‘explored’ by the children within the safety of a fenced campus. The ‘bhool-bhulaiyan’ (maze) and the haunted house are the other attractions for the kids. 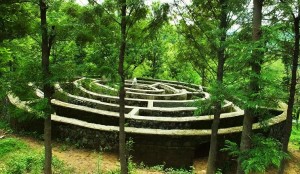 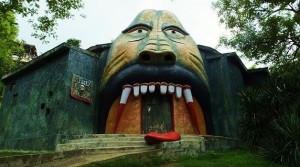 An artistic ‘Machan’ has been built atop the hill for viewing the surrounding landscape and the hills. A short walk takes one to the impressive water-fall off the cliff at Thalapur. 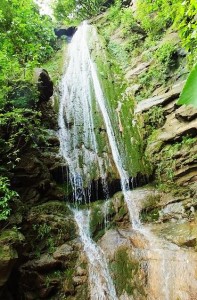 Boating facility is available at the Tikkar tal lake which also sports an impressive fountain. 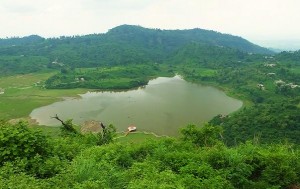 P.S. A local from Thalapur tried his level best to convince the tramp that the demon-head design of the House of Horrors has been borrowed from the original inhabitants of the Tikkar Valley who perished in a catastrophic earthquake! Of course this happened much before the Pandav princes made their appearance at the Lake of Death!!