Farmers in the Morni area have of-late started experimenting with Polyhouse farming. A polyhouse is a tunnel like structure of polythene, generally semi-circular in shape that is used for growing plants under controlled conditions. Originally designed to trap the sun’s heat like a greenhouse for growing plants in colder climates, polyhouse farming has today come of age with the more sophisticated ones employing technologies for controlling temperature, humidity and ventilation inside the polyhouse. Some even heat up the soil to get rid of pests and bacteria. The high cost of erecting polyhouses generally restricts their use to floriculture and for running high-end plant nurseries. More recently, farmers have started experimenting with off-season vegetables like growing tomatoes during the monsoons.

In Morni one can see numerous semi-circular polyhouses that have sprung up in the terraced fields along the Ghaggar valley in the area of Chhamla and Barisher. The oldest and easily the best known polyhouse farm in the area is that of one Vijay ‘Babu’ a Thakur of Saraon village of Himachal that borders Barisher, the last village of Haryana on the Morni-Nahan road. One can spot the neat rows of white and pink polyhouses from a fair distance as one drives down the road to Barisher along the Ghaggar River. Almost everyone in the area seems to know Vijay Babu and the Tramp decided to pay a visit to his farm to get a first-hand experience. 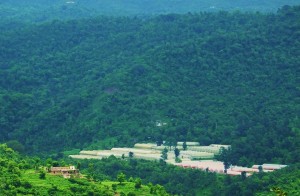 One has to drive down the Morni-Barisher road until one reaches Haryana’s border with Himachal formed by the Dehi Nadi (as Ghaggar is locally known in the area). A newly constructed bridge takes one over into Himachal territory. 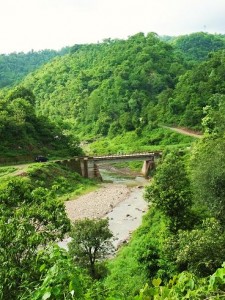 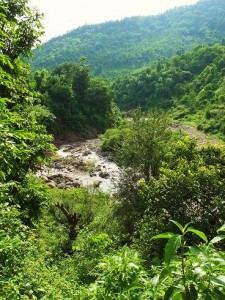 A hill track branches off from the main road right next to the bridge and leads one to the polyhouse farm of Vijay Babu. The picturesque farm has a beautiful backdrop of hills and has been set up in what was once a plum orchard. Terraced fields of maize and some of the old plum trees crowd around the polyhouses. The farm sits high on the left bank of the Dehi nadi and has a natural stream running through it. The polyhouses are exclusively dedicated to commercial farming of roses. Column upon column of bright red roses in different stages of bloom greet the inquisitive visitor who takes a peek inside the rather hot and humid polyhouse. 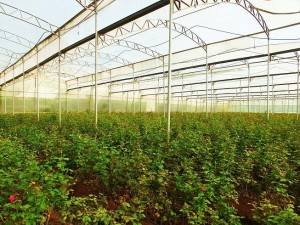 Inside view of a Polyhouse 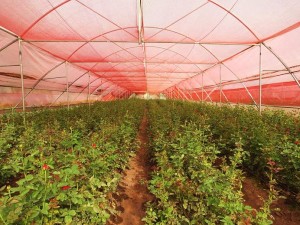 Vijay Babu sells most of his roses in Delhi. The luscious-red rose buds are taken by jeep through Chhamla, Jodhian, Kheda Bagdha, Jallah, Chandimandir to the Chandigarh Railway Station and from there by rail to Delhi. Smaller orders of a few hundred buds from Chandigarh are also catered to. 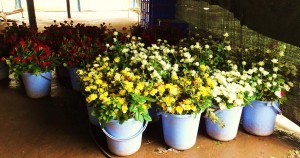 The polyhouses are of Israeli technology. The main stakes and posts that support the arching roof need replacement after some years as they rust with the watering of plants. 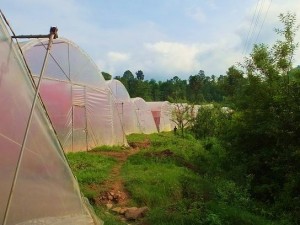 The farm labour is curiously drawn largely from the east with very few locals and has been placed under the efficient command of one Gaur Khan. Vijay Babu’s ‘kothi’ stands proudly atop the hill overlooking the farm and lords over the landscape like a modest castle of the erstwhile Thakur Rajahs of the Protected Hill States.