It was Sunday, the 3rd of December, 1971. Civil war had been raging in East Pakistan ever since the crackdown in Dhaka on the night of 25th March, 1971 by the Pakistani Army. The leader of the separatist Bangla nationals, Sheikh Mujibur Rahman was arrested in the midnight swoop and a violent pogrom was unleashed to crush the dissidents. The genocide that followed saw the slaughter of hundreds of thousands of innocent Bengalis and millions fled the country and sought refuge in Indian Territory. Pakistan saw the build-up of Indian troops on the East Pakistan border with growing suspicion. The Pakistani Generals anticipated a military intervention by India with the onset of winters to deal with the refugee problem in the East. The Pakistani Air Force launched a blitzkrieg with pre-emptive strikes on eleven airfields in north-western India in the evening and night of 3rd December. Over 50 Pakistani planes participated in ‘Operation Chengiz Khan’ and the Indian ack-ack guns lit up the evening skies as they responded to the sudden challenge. 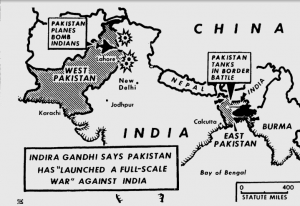 The Indian Air Force launched retaliatory strikes the same night. This marked the declaration of war between India and Pakistan that lasted for 13 days and ended with the surrender by the Pakistani Army in East Pakistan on 16th December.
The short but fiercely fought war witnessed numerous attacks on Indian Air Force Stations by Pakistani War Planes. It was in one such attack on the Ambala airfield on the night of 6th December, 1971 that a Pakistani Warplane reportedly got hit and crashed somewhere between Mallah and Morni. A police party was despatched the following day to locate the crash site. It is not known whether they found the wreckage or not. The newspapers of the following days carry no further news of the crash.
The Tramp, is greatly intrigued by this mystery and has launched an ‘investigation’ to bring out the truth. As a first step, the news items carried by the Tribune on the Pakistani air raids on Ambala and Chandigarh airfields as well as on the reported crash at Morni have been located and are reproduced for the readers. 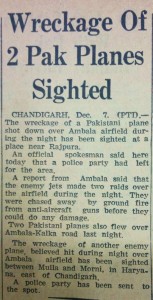 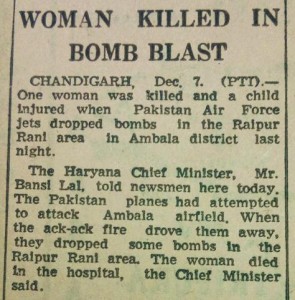 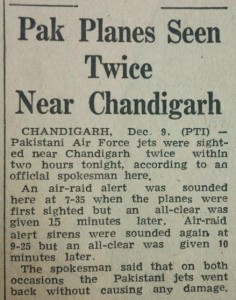 Was it that a Pak plane got hit over Ambala and it then flew towards Morni shedding its bombs over Raipur Rani in desperation before it crashed into the hills between Mallah and  Morni? The Tramp needs to locate a member of the police party that went looking for the wreckage 42 years ago to get an authoritative answer!

P.S.
The ‘Official History of the 1971 India Pakistan War’ published by the History Division of the Ministry Of Defence, Government of India (1992) makes no mention of the air-raids on Ambala or the crash in Morni Hills on the night of 6th/7th December. There is a mention of the air-raid on Chandigarh at 1827 hours on 6th December by four Pakistani Mirages. There is also a mention of numerous single-aircraft air-raids on Amritsar and Pathankot and the bombing of Bhuj airfield on the night of 6th/7th December.