The Mahatma Gandhi National Rural Employment Guarantee Act (MNREGA) was enacted in 2005 and is aimed at enhancing the employment opportunities for the rural poor and guarantees a hundred days of wage-employment in a financial year to a rural household whose adult members volunteer to do unskilled manual work. The adult members of a household have to register themselves with the Gram Panchayat in the jurisdiction of which they reside.The household is then issued a job card. Every registered household can apply for work under MNREGA Scheme and is guaranteed a 100 days of wage employment in a financial year. In granting employment preference is given to women registered under the Act. Employment has to be provided within a radius of 5 KM of the village where the job applicant is registered. In case employment is provided outside this radius, 10% extra wages have to be paid. The applicant has to be given work, however, within the Block. The Ministry of Rural Development, Government of India vide notification dated 26th February, 2013 has fixed the daily wage for an unskilled manual worker in Haryana (under MNREGA) at Rs.214/- with effect from 1st April 2013 and this is the highest in the country, the lowest being Rs. 135/- .
The Act also aims at creating durable assets that improve the avenues for earning livelihood for the rural poor. Water conservation & harvesting, afforestation, renovation of traditional water bodies, improvement of rural connectivity to provide all-weather access, digging of minor/micro irrigation canals and land development are the preferred works to be taken up under MNREGA. Thus the goal is to make the improvement of employment opportunities sustainable over a long period of time.
A look at the comparative figures for employment provided to men and women in 2012-13 indicates that only a minuscule percentage of women get employment under MNREGA Schemes in the Morni Block and this figure is far lower than the average for District Panchkula which in turn compares poorly with the average for Haryana State that lags behind the national average! 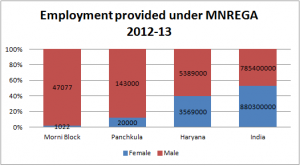 A look at the statistics of registration of women workers for the Morni Block shows that barring the Panchayat areas of Plasra and Bhoj Ponta, very few women are registered for employment.

This indicates a reluctance of the rural women to work for wages on public works. The women of Morni region do, however, work hard getting fodder for the cattle and firewood from the forests. The women handle all household chores and also tend to the cattle in virtually every rural household.
The percentage employment provided to Scheduled Castes is also far lower in the Morni Block when compared with the District, State and National averages. This is, however, on account of the fact that Morni population is largely consisting of the Pandit and Rajput castes and the presence of Scheduled Castes is limited. The percentage of SC households (of the total) registered under MNREGA and the percentage actually provided employment in the Morni Block in 2012-13 is virtually identical, that is, 15%. 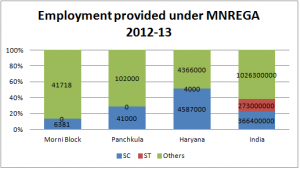 About Rs.1.05 crore were spent under MNREGA in 2012-13 in the Morni Block for works implemented through Gram Panchayats and the Forest Department.The panchayat-wise break-up of expenditure is given below:- 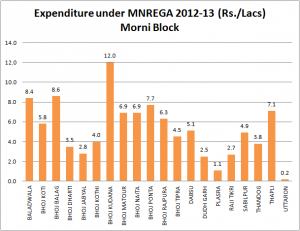 MNREGA has faced a lot of flak lately for generating assets that are of little utility and that do not contribute to any long term gains for the rural poor. To make matters worse, the 100 days guaranteed employment allegedly encourages the rural folks to stick it out in their villages and the labour is no longer available for undertaking major infrastructure works and also for the industries thereby slowing down growth. ‘How many wells can one dig?’ is the common rhetoric amongst the critics of MNREGA. The author has some insight into the operation of MNREGA Schemes in the Morni Block that is considered one of the most backward areas of Haryana State. The average villager residing in the many dhanis spread all over the picturesque hills of Morni is typically rather laid back in his approach to life. He is extremely reluctant to go to the cities in the plains in search of better employment avenues. He is mostly content with the meagre level of existence that he is able to cull out from the rocky clay that makes up most of these hills. The long dry summer spells and the forest fires certainly do not help his lot. But he is a proud man and maintains himself with a lot of dignity. A certain amount of resignation to fate and destiny is also clearly apparent in these simple hill folks. Water harvesting works, improvement of rural connectivity and afforestation are the principal works undertaken under MNREGA Schemes in this block. The forest department has had watering holes dug up all over the hills but these are generally dry in the summer months. Small lakes/large ponds have been created in the foothills by building earthen dams across seasonal choes. These lakes have proved to be a boon to the wildlife but have served only a limited purpose in providing water to irrigate the fields. The rainy season sees heavy siltation and the irrigation pipes are almost invariably buried by the silt within the first few years of the building of the dam. The lakes/ponds are, however, a source of water for the cattle for most part of the year. The positive impact on wildlife by providing safe water sources deeper in the forests and higher in the hills needs a systematic study and assessment.
The villages in the higher hills see the kutcha pathways disappear with the heavy monsoon rains every year. Large parts of the metalled roads also get washed away every year with the collapse of stone embankments (dungahs). The remote dhanis of Morni get almost completely cut off from the main roads. Village kids are sometimes unable to attend schools for long periods of time due to damage to the access routes to the schools. For all such parts, MNREGA has proved to be a boon and one can see the villagers working hard to restore their paths immediately after the rains each year. The restrictions on use of concrete etc due to environmental concerns do make the annual restoration a repetitive effort (and expense) but this cannot detract from the immense impact of such works on improving the quality of life of the hill folks. In assessing the overall impact of MNREGA one must approach the issue from the perspective of all the stakeholders and not merely rely on the armchair analysis of the economists who live their lives in the relative security and comfort of the University campuses! Thus let us not condemn the effort of the romantic who throws the starfish marooned on the beach with the receding tide back into the sea to save the few he can. We just have to ask the starfish that got thrown back into the sea!!

A special mention needs to be made of the successful computerisation of NREGA records with an amazing amount of data being made available on www.nrega.nic.in. The website offers particulars of all households registered under MNREGA , particulars of all the workers (with photographs) who were offered employment and paid wages under the MNREGA Schemes, details and photographs of works executed etc. Data is uploaded from thousands of locations with millions of records being fed into the system to create a database that offers exciting possibilities for the social researchers besides building a high level of transparency into the system. The graphical presentation of data in this post is based on data retrieved from the website of MNREGA. The discovery of leakages in the programme and occasional frauds is a testimony to the high level of transparency built into the scheme, where anyone and anybody can access the micro-level details of expenditure incurred under MNREGA and verify the authenticity of the same.