Man-leopard conflicts in the Morni hills are rare and have been generally restricted over the decades to the occasional cattle-lifting by these cunning, spotted-felines. The laid-back hill dwellers residing in the remote hamlets of Morni ilaqa, have over the centuries, resigned themselves to bearing such losses. The cattle-lifting incidents typically receive little attention from either the authorities or the media. The protests by the locals are generally muted and they quickly reconcile to the meagre compensation that is dished out to them as per the rules of the Forest Department. The peace of these idyllic lower-Shivalik hills was, however, shattered by a tragic incident that occurred, about 10 KMs from Morni town, 25 years ago.

It was the early, cloudy morning of Thursday, the 10th of August, 1989 when Mohan, aged 13 and his cousin Yaad Ram, aged 15 were making their way through the forest for their school at Morni. The boys had come from their home at Chhaila, some 2 KM further down the winding kutcha track. They would have to wheel their cycles for another 3 KM along the track till they reached the Nalaghat T-point from where they could pedal up the Morni-Badyal road for the remaining 7 KM to reach Morni. 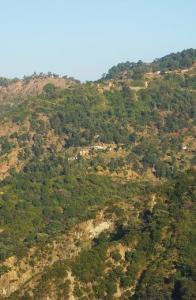 The sky was overcast as the monsoons were in full-swing. The ubiquitous lantana with its sickly odour was crowding the narrow forest path that the locals had cut through the thick scrub. Chhaila, is a tiny hamlet that falls under Bhoj Jabiyal in Morni. To reach this village, one needs to take the Morni-Badiyal road that forks into two beyond Sherla, a large, picturesque village that sits atop a broad level hill and is known for its ‘prachin’ Hanuman temple and its large, muddy pond (tal). One turns west at the Nalaghat T-point to leave the Badyal road and to take the road that leads to the Samlasan Devi Temple at Samlotha. One crosses Kaajarh to reach the point where a small hill-track branches off to reach Chhaila. The road to Samlotha is now metalled but was still kutcha in 1989.

The boys had reached the point where the path descended sharply before beginning to climb again towards Kaajarh when the beast made its appearance. In seconds Mohan lay dead, the poor child’s neck broken and the skull crushed by the terrible strike of that vile cat. The children’s parents did not realize the foul deed until it was evening and the children did not return from school. Parmanand, Mohan’s father and Prem Chand, Yaad Ram’s father were accompanied by their fellow villagers as they set out to search for their children. They found Mohan’s body lying in a pool of blood with the pugmarks of the leopard all around. The boys’ cycles lay at the spot. As did their school bags. Yaad Ram, had disappeared. Had he run-off in terror? Or had he struggled to save his cousin and had also been killed and carried-off by the leopard? The party hunted for the missing boy till late hours until it got dark and the search was called-off. The leopard struck again that evening at the neighbouring Kajarh village and carried off a goat.

A pall of gloom descended upon the village as the search party brought Mohan’s mangled body back home. There was terror all around as nobody could tell as to who would the next victim of the Man-eater. It began to rain again that night, washing away the signs of struggle and the pugmarks at the site of the leopard attack. 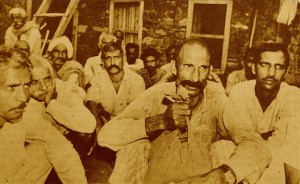 There had been reports of cattle-lifting by leopards in these parts of the hills for past many years. A cow and a bull had been killed at Gajhan. Locals had sighted a female leopard with her cubs in close proximity of human-settlements on several occasions. This was all a malady of the changing times. The once inaccessible hills of Morni had now been opened up to tourism and wheels of development by building of metalled roads to improve connectivity. The latter-half of the 20th century witnessed a sharp decline in the ungulate population in Morni hills due to degradation of habitat and rampant poaching. This meant lesser availability of natural prey for the leopard population. The leopards adapted to this changed scenario by moving closer to human habitations. They now augmented their dwindling supply of natural prey by poaching on the cattle and goats belonging to the villagers. Thus, since the 70s, the hills have seen an increasing number of cattle-lifting cases. The leopards will not spare even the village dogs! The leopard, generally avoids any confrontation with the humans as it ‘knows’ through its ‘racial instinct’ that this will certainly bring about its eventual destruction. A cattle-lifter does, however, gradually lose its shyness of humans and gets progressively bolder in its raids to steal cattle. The risk of a chance face-to-face encounter then goes up and the leopard may strike the human out of fear when startled, as is the case with all wild animals. The leopard may also, in rare cases, prey on humans if it is unable to catch its natural prey due to injury or old age. Even in such rare cases it is too cowardly to take on a fully grown man and will if at all, attack only children and women who appear to it as soft targets.
The villagers commenced their search for Yaad Ram again at first light. Those with weapons carried their guns loaded apprehending a second strike by the leopard. Children were kept indoors. The search party found fresh pug-marks near the cycles, confirming that the leopard had returned to the ‘kill’. Generally, if the animal has killed a human accidentally, out of fear, it will not venture again to the site. It is only the Man-eaters who will return to the site of the ‘kill’. Word had been sent to the authorities about the tragic event. The Chief-Conservator of Forests, the Sub-Divisional Magistrate and the Station House Officer of the Chandimandir Police Station congregated at Lal Munia, the Forest Rest House at Morni to decide the strategy for dealing with the crisis. Help was sought from the wildlife experts at the Wildlife Institute of India, Dehradun and the established ‘shikaris’ of the region.

The Tribune carried a prominent story by Donald Banerjee on the Man-eater on page-one of the newspaper of 12th August. The news was not missed by Chaudhury Jagdeep Singh of Ganguwala, the younger brother of the legendary hunter-turned conservationist and freedom-fighter, Sher Jung. Their father Partap Singh, was the collector of Nahan in the princely State of Sirmaur and was an ace shot. His sons, Sher Jung, Jagdeep and Shamsher were all masters in the jungle-craft and reknowned shikaris of their times. Jagdeep’s younger son, Kirnesh applied for permission to hunt down the Man-eater which came through on the 16th. By the afternoon of the 17th, Ch. Jagdeep had landed at Lal Munia Forest Rest House in his Gypsy with his sons and Rakesh and Kirnesh and two expert trackers. The local forest officers narrated the details of the incident and the shikaris reconnoitred the road uptill the point where it branched off into a kutcha track for Chhaila. They were joined in the late evening by Ashish Dasgupta, Col. Sher Jung’s friend and protégé from the ‘Muktivahini’ days. The strategy was chalked out for an early morning hunt for the Man-eater.

It was late night when the shikaris suddenly planned a late night drive up the Morni-Badyal road to see if the Man-eater was prowling around the area. Ashish took the wheel of the Gypsy and was joined by Rakesh and Kirnesh each armed with a 30-06 Czech Delux with a 4X scope! The trackers were carrying .12 bores and the forest guard navigated the party. Luck had finally run out for the vile, Man-eater as Rakesh stopped the party a couple of hundred yards from the huge-grey boulders that overlook a bend near Sherla. The rocks are at the very edge of a sharp drop to the south into the narrow valley of the rivulet that separates the Morni-Sherla ridge from the Gajhan ridge to the south. The rocks were shrouded with the lantana growth and looked sinister in the night. Rakesh had spotted a movement in the shadows. He pointed a spot-light on the area and immediately picked up the leopard amongst the rocks in the sharp beam. The animal immediately clambered to the top of the rocky outcrop to evade the glare, seeking refuge in the bushes to make good its escape. The eyes gleamed at the hunters from the bushes with hatred (terror?). It was now or never. Kirnesh took a head-shot, between the eyes from a distance of over 200 yards with the target illuminated by the spot-light. A difficult shot under the circumstances but he held his nerve and made no mistake. The bullet thudded home and that was the end of the Man-eater of Morni.

The team carried the dead leopard back to the rest house where it was inspected by the proud father of the ‘braves’. The inspection revealed that the animal had lost two of its claws in the right paw and the forearm was weakened. There were other injuries on the body, probably from a territorial brawl with another leopard. A canine was broken. The belly was empty. It was a classic case of an injured and weakened leopard who had taken to killing humans, probably by accident. A Man-eating leopard is notorious for its cunning and vile and is much more difficult to track down than a Man-eating tiger as the leopard knows the ways of man having lived in the proximity of human settlements. The people of Morni were lucky that the Shikaris had got the animal on the very first night before it became a confirmed Man-eater. 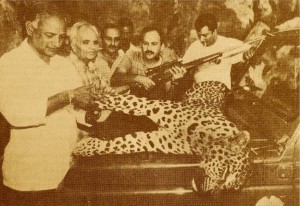 The officials of the forest department later confirmed that it was the same animal that had killed Mohan by matching the pug-marks that they had lifted from the site near Chhaila. The hunt was received with an enormous relief by the locals who had been living in terror for the past week. The Forest Minister and the entire top-brass of the Forest and wildlife Department as well as the DC descended at Lal Munia to see the dead ‘villain’ and congratulate the shikaris. It was a large-sized leopard, 7 feet and 3 inches ‘round the curves’ (nose to tail). The gallant shikaris suggested that the bounty announced by the Government for hunting down the rogue be given as aid to Prem Chand, the hapless father of Yaad Ram who was still untraceable. Yaad Ram was found many days later. He had managed to escape the unhappy fate that befell  his cousin and had run blindly through the forests in a state of terror. The trauma had resulted in complete amnesia of the ghastly experience. He had been spotted walking in a dumbstruck state by some trucker who had taken him along when the child failed to speak or give his identity.

The Tramp happened to visit the rocky outcrop some years back, where the Man-eater was shot. The spot has been christened the ‘Tiger-Point’ by the locals. Villagers of Sherla report seeing leopards on these boulders.

Frequent visits of the spotted-cat have also been reported from the Sherla village. An elderly lady reportedly shooed away a leopard from her garden after safely securing her dogs inside her house, lest the villain should make a meal of them!

The hills have returned to their former peaceable slumber, the tragedy forgotten .

It may be worthwhile to note that there has been only one solitary episode involving loss of human life due to man-leopard conflict in the entire Morni hill region in the past 25 years. By contrast, there is a death, virtually every year, from a snake-bite during the rains. The biggest threat to humans is of course from the Homo sapiens themselves with more than one murder being reported in the region on an average every year .