Morni hills are composed of a fragile mix of clay, rocks and boulders and experience heavy erosion during the monsoons. Landslides are common, especially where the natural stability of hill slopes has been disturbed by cutting roads and paths into the hill, rendering the structure unstable. The sudden heavy rainfall towards the end of the monsoon season in September 2010 had caused devastating landslides all over the hills. The simple hill folks were shaken out of their slumber by the terrifying force of nature and were half-convinced by the dark prophecies of a fast approaching apocalypse. The monsoons in the following two years have been easier on these lower Shivalik hills but a calamity may be just around the corner. 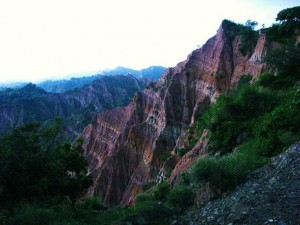 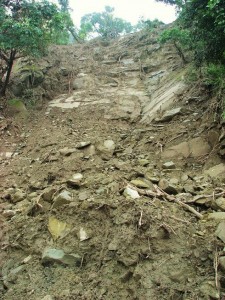 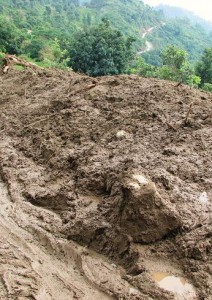 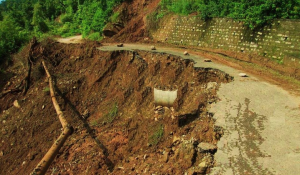 The devastation caused in Uttarakhand in 2013, by the sudden heavy rainfall playing havoc with a mountain terrain rendered vulnerable by unplanned construction and rampant deforestation, must serve as a wake-up call for the entire Himalayan region. We must urgently restore the green cover to the hills and provide them with a thick protective layer for preventing soil erosion that is increasingly assuming calamitous proportions during heavy rainfall. The slopes rendered unstable with human construction activity need to be stabilized with innovative vegetative solutions. This ‘Green Action Plan’ also holds the promise of mitigating Morni’s perennial problem of water shortage during the summer months. Greener slopes will slowdown the run-off of rainwater and will help conserve soil moisture and maintain the flow of natural springs during the dry season.

A survey of the erosion hot-spots in the Morni hills reveals that the land in most such locations is in a badly degraded state. The sharp slopes and poor soil conditions shall not support any immediate effort to reintroduce the native trees and shrubs that were once abundant in the area. The ruined ecology of these crumbling hills shall need to be ‘nursed’ back to health before a tree plantation can be attempted. The eroded hill slopes will need to be first covered with an appropriate ‘nurse’ plant that can sustain in the present adverse conditions and help rebuild the natural terraces by conserving soil and water. A micro-climate will gradually be created for reintroduction of the native fauna and the reestablishment of the natural ecology of the place. The search for a ‘nurse’ plant for the degraded Shivaliks has, of late, narrowed down to Vetiver, a wonder grass that has reportedly performed miracles in restoring eroded hill slopes all over the world. 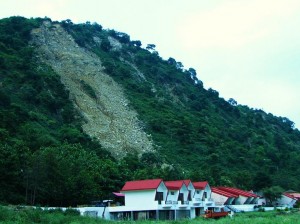 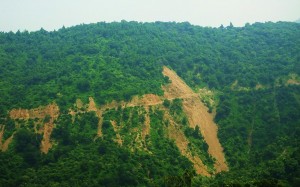 The Vetiver Story:
Vetiver/ Khus Khus (Vetiveria zizanioides) is a tall, tufted, scented, perennial clump grass originating in South India, with long and narrow leaves and erect and stiff stems that grow to a height of up to 2 metres. The roots are dense and deep (can grow up to 15 feet deep) and have an average tensile strength of 75 Megapascals! The roots grow vertically and normally do not spread beyond the footprint of the crown of the plant. The roots yield an aromatic oil that is used as an ingredient by the perfume industry.

The vetiver grass offers a low cost vegetative solution for soil and water conservation. The grass is planted in a line along the contour terraces to form a narrow stiff hedge that slows down rainfall runoff down the slope, spreading it out evenly. The vetiver hedge acts like a sieve and traps runoff sediments to create natural terraces. The strong, deep roots bind the soil with ‘fingers of steel’ to improve its stability on sharp slopes. Vetiver has been used in over 100 countries, especially in the tropical and sub-tropical regions of the world, to stabilize hill slopes, flood embankments, highway and railroad embankments, as well as river and canal embankments.

Vetiver also has other natural advantages. It does not propagate like a weed and will grow only where it is planted. Its crown grows below the soil surface and is able to survive damage from forest fires and overgrazing. It’s perennial and can survive for decades. It is resistant to pests and diseases. It can survive periods of drought. It tolerates a wide range of soils including saline, acidic and rocky soils. The grass, however, does not tolerate permanent shade and harsh winters with ground frost.

The grass is used as fodder and is cut and fed to cattle during the high growth season. In north India, the aromatic khus-khus pads used in desert coolers made of dried roots of vetiver grass were a common sight during the summer season. The vetiver oil has also been used in traditional medicine as an anti-septic, anti-spasmodic etc.

Vetiver is propagated vegetatively by dividing the clump into slips with about 3 tillers each. The slips are then planted 10 to 15 cm apart in a line along the contour. The vertical interval between the successive rows of the vetiver hedge depends upon the slope, soil type and precipitation. Generally, sharper the slope and heavier the rainfall, shorter the vertical distance between hedgerows. The propagation is generally done during monsoons when water is abundant. Extended dry spells between the rains sometimes need supplementary watering in the initial phase.

The Experiment:
The Vetiver story, however, seems too good to be true. The Tramp, hence decided to conduct a limited experiment by planting Vetiver slips on a small vacant patch at the Tikkar Cottage to see how the miracle grass fares in the hard, rocky, termite infested and unforgiving clay of Morni hills. Sourcing the grass from Kerela was the obvious challenge. Help was at hand from Sh. M P Singh, an engineer turned environmentalist, who has been working with vetiver for some years and has successfully employed it for stabilizing degraded slopes and for greening hillocks at Anandpur Sahib. The last minute vacillation was brushed aside by an enthusiastic young man who has taken up the Green cause for the Tramp. The Vetiver slips have been planted and if the ‘Living Steel’ grows even half as well as the hype, the experiment shall be scaled up to a full-fledged Vetiver nursery in the following year. An erosion site shall be ‘adopted’ for reclamation with Vetiver with the involvement of the village Gram Panchayat and the assistance of the forest department. An effort will also be made to persuade a local farmer to plant a vetiver hedge along the contour terraces of his hill-side fields to assess the promised impact in reducing water run-off and conserving soil. 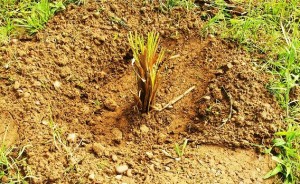 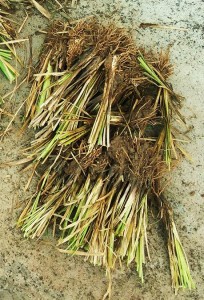 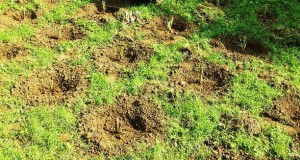 5 weeks through the monsoons, the grass had picked up well. Growth was better wherever the sunlight was adequate. 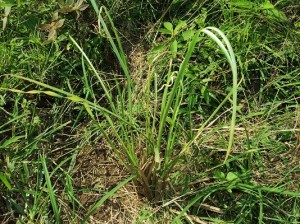 20 months and two monsoons later the vetiver plants at Morni have all survived but the growth is negligible. 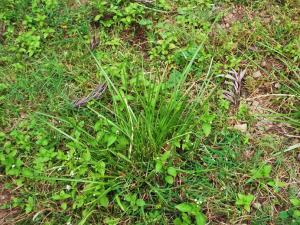 This in sharp contrast to the impressive growth in a farm in village Sona near  Maili Dam in Hoshiarpur in the Shivalik foothills. The vetiver saplings were divided into two lots, with one being planted in rocky soil strewn with gravel at Morni and the other at Sona farm. The growth at Sona shows that the plant holds promise but its success in poor soil and rocky conditions remains to be tested. 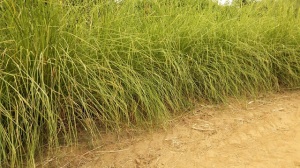 9 thoughts on “Vetiver introduced in Morni – An Experiment Begins”