Northern Spotted Grasshopper (Aularches miliaris) – a colourful grasshopper of South and Southeast Asia with dark, glossy green head and thorax and a canary-yellow band on the side. Wings are green with yellow spots. Legs are a metallic blue.  Abdomen is banded in red and black.

A heavy and sluggish grasshopper it is capable of only short leaps. Its bright colours warn off the predators. On being threatened or picked up it ejects a foul smelling, bitter-tasting bubbly foam (mucous) and partly covers itself with it (and hence its alternate name- Foam Grasshopper). It breeds in October.

This particular specimen was spotted by the Doc while on a trek along the Berwala choe on a hot and humid afternoon in the month of August. 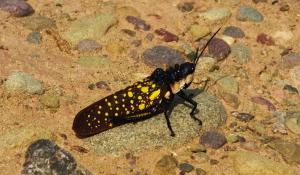