Indian Tortoiseshell  (Aglais caschmirensis) is a colourful, medium-sized butterfly (wingspan of about 2 inches) that has reddish-orange wings with prominent black and yellow, high contrast ‘zebra’ markings on the forewings and a border of blue-spots on the edges. Its larvae feeds on nettle (urtica).

It is difficult to spot when its wings are closed because of its perfect ‘woody’ camouflage. The wings may be flicked open to flash the bright colours to scare off a bird.

It can be spotted on open ground with wings open when the temperature is cooler. The wings are kept closed under warm conditions.

It feeds on the nectar of wild and cultivated plants.

This specimen was photographed at Karoh Peak which at 1467 metres is the highest peak of Morni-Tipra Hills. 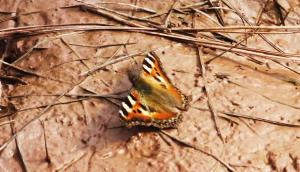