He seeks the story of life. The story revealed in the song of the robin. The babbling of the brook. The death swoop of the shikra. The gorals silhouetted against the morning sky. The hum of the cicadas. The fragrant flowers of the Mahuaa that lure the cheetals. The mesmerizing  hues of the autumn. The burning desert sands. The tinkle of the cow-bell. He loves to tramp through wilderness to search out the uninitiated. To ferret out those forgotten earthy tales of human wanderings. Raw. Without embellishments. Tales that the Tramp has been coaxing him to share. Here is the first from the pen of ‘The Seeker’.

Despite his gaunt frame, I noticed a sparkle in his eyes. An unmistakable sparkle of life. Of his youth. We were sitting on charpoys out in the open, at a Gujjar dhaani deep in the forest. And Sher Singh, a Gujjar elder was about regale us with an incident that happened many decades ago but was still etched clearly in his memory. To start with, he was somewhat reticent and kept repeating “Yo to main kal ke leye rakhey hoon. Aaj to aur batey karte hain” It took us quite a bit to cajole him to narrate the incident. Finally, he gulped his “tharra” (country liquor), took a deep breath and began. And here is the story.

It was just another night for Sher Singh, a young Gujjar, as he herded his buffaloes up the dry ‘khol’ (stream bed.) Perhaps he had a particular glade in his mind where he planned to graze the animals while he could rest, or even take a nap for a while. Though his job demanded him to be alert. Alert not only to the predators in the jungle but also to the forest guards, for grazing cattle in these reserved forests was prohibited by law.

The moon, being in her last quarter, had risen by the time Sher Singh reached his destination. A grassy glade on the broad side of a hill overlooking his village. The cattle, as its wont, spread out in no time and started grazing. And Sher Singh made himself comfortable by lighting a ‘beedi’ (an Indian cigarette) and smoked. Occasionally he would muster back an animal that had strayed a bit too far from the glade. ‘Dhadoo’, the night wind that blows in these hills, was now growing stronger and Sher Singh wrapped his ‘kambli’ (a thick shawl) around himself and lighted another beedi to keep him warm. The young gujjar and his animals were at peace with themselves and the world. Till the tigress struck.

And the attack was lightening swift. The much feared and hated but familiar “whoof whoof” followed by stampeding of the animals. It all happened so quickly. Shaken out of his languor, Sher Singh grasped his staff and scrambled to his feet in no time. And amidst the melee, he quickly located the sounds of the life and death struggle between the predator and the prey. One of his buffalos, a milch animal in its prime, was struggling to free itself from the tigress, which was holding it by the neck and trying to pull it down, typical tiger style.

Bran thought about it. “Can a man still be brave if he’s afraid?” “That is the only time a man can be brave,” his father told him. — George R.R. Martin, A Game of Thrones.

Numbed by fear, Sher Singh cursed the tigress aloud, hurled his staff with all his might and managed to hit the tigress on the flank. And it had the intended effect, for the tigress left the struggling buffalo and scrambled into the scrub near the edge of the glade. As luck would have it, the buffalo quickly got back to its feet and Sher Singh took off his safa (headgear) and wrapped it around the stricken animal’s neck. By that time, the rest of the animals had also collected around their master.

The herdsman and his animals started on their way back to the village. On the other hand, the tigress had recovered its wits by then and was in no mood to give up on its prey. It kept circling the herd, snarling and roaring, trying to intimidate the Gujjar. But Sher Singh, the local lad that he was, had grown up in these jungles and knew the ways of tigers only too well. He knew from experience that if he kept his nerve, the tigress would not attack. It was growling to bolster its own courage. 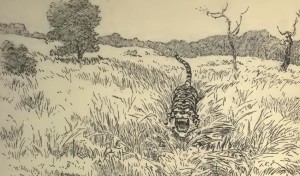 The village was still a few miles away. Sher Singh, along with his animals continued to move down the hill side in the weak moonlight that managed to filter through the heavy foliage of the sal jungle. The tigress, following them and only a few yards away, was still relentless. Sher Singh was careful to keep the stricken animal close to him and continued to fling his staff and yell at the tigress. Slowly, they covered the distance and the forest began to thin out, and soon they were within earshot of the village. The tigress finally left the Gujjar alone with his animals and returned to the forest. Sher Singh reached his dhaani (cluster of homes) and nursed the injured buffalo. The animal eventually recovered.

“And I survived to tell the tale”, he chuckled as matter of fact, as he downed another shot of the potent brew.

And as I tell the story, I muse about those jungles and their denizens, the dhaani, the courtyard, the charpoys, the acrid smoke rising from the bonfire, the fireflies, smell of the country liquor, the old Gujjar and his tales of yore.