The never ending search for the history of Morni and Kotaha has now led to the, hand-written British records of the 19th century that have been meticulously preserved in the archives of the British Library at London. These bound volumes form a part of the India Office Records – the records of the British Rule in India including hand-written/published official records, photographs, maps etc. The Tramp shares with his readers some interesting titbits of history that lay buried in the ‘vaults’ of the British Library. 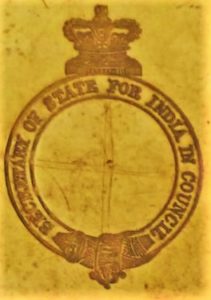 Decision of Government in the claim of the Chief of Kotaha to some villages formerly appropriated as an endowment to the Temple of Telokepore:

The right of the Kotaha Chief to resume these villages was acknowledged in 1821 by Captain Ross, and again by Captain Murray in 1823; and it seems to have been without any sufficient ground that Sir Edward Colebrooke, in 1827, reversed these decisions and replaced the Fakeers in possession. Your decision restoring the villages to the Chief, has our entire approbation.

Denial of Police Powers to the Meer of Kotaha

… two Cis-Sutlej Chiefs, the Nawab of Koonjpura and the Mir of Kotaha who were favourably reported on by Lieut. Col. Mackeson, the severity of your original orders was, we think, very properly mitigated. The usual commutation for Contingents was remitted; compensation was granted for the custom and transit duties abolished by order of Government and the Nawab of Koonjpoora (if the instructions of the Chief Commissioner dated 31st January 1849 have been executed, on which point a reference has been made to the Board) was again entrusted with some powers of Police and Criminal Administration, subject to the control of the Deputy Commissioner. We wish for further information on this point. A report had been received from Major Edwards on 38 of the principal Jageers in the Punjab held by Sirdars who were not concerned in the insurrection of 1848/49. This report seems to have been prepared with great care and industry. The Governor General having regard to the fact that many of those named in this list are the representatives or members of the known families in the Punjab, and in consideration of the services which all in a greater or less degree, have rendered to the British Government in recent events, has acceded to the recommendation of the Board that certain portions of the Jageers shall descend in perpetuity to the heirs male of their bodies.

The Board of Administration in their letter dated 6th September 1852 entirely acquit the Meer of Kotaha of having failed in his duty in the war of 1846, and you have in consequence made his exemption from commutation in service in perpetuity instead of limiting it, as at first intended, to his own life. You however still enforce the remaining part of the penalty imposed on him, the abrogation of his police powers. If it be correct (as stated by the Officiating Commissioner Cis Sutlej States in his letter of 2nd March 1850) that this chief holds Sunnud bearing the signature of Sir D. Ochterlony, which in express terms guarantees to him and his heirs, Police Jurisdiction within the limits of his property, the extinction of this jurisdiction could only be justified on his part, of which, as we understand the Board’s Letter, he now stands completely acquitted, and we therefore request an explanation of your having maintained this part of the order issued under a mistaken impression of his conduct.

Case of the Meer of Kotaha

We are of the opinion that the several arrangements made with regard to this Chief since 1846 must be considered as one scheme, under which he has, in common with other Chiefs, been for the public advantage deprived of his police jurisdiction and under which, in contradistinction to other Chiefs, he has, for his own advantage, and that of his family been assured that his estate will not be subjected to the deduction of 1/8th of the revenue (in this particular case about 1800 Rupees a year) usually levied by the British Government as commutation for service.

These villages being held by the family in possession under an attumgha grant from the father of Meer Ukbar Allee, which grant was recognized by Sir D. Ochterlony at the time of restoring Ukbar Allee to his ancestorial possession, we agree with the Lieutenant Governor that the title must be respected by the Jageerdar.

Complaint of Goormookh Sing that the Agent at Delhi had, contrary to the orders of Government directed his village of Bhainee to be made over to the Chief of Kotaha. It appeared on enquiry that no such order had been issued.

The Tramp owes gratitude to ‘Othello’ for sacrificing his pub-time on tracing out and bringing back these nuggets of history to his obsessive friend.