Lieutenant Proby Thomas Cautley, the famous ‘fossilwallah‘ of the Shiwalik Hills,  wrote a letter in April 1835  to the Secretary Bengal Asiatic Society (it was published in the 4th Volume of the Asiatic Journal the same year) in which he described the working of the gold washers in the beds of the rivers under Nahan. Cautley talks of a river that emerged from the fossil-rich clay and boulder Shiwalik hills, to the south of Nahan, that he calls the Gumti River. He describes the working of the gold washers who extracted gold particles that were washed up by the river from the hills by meticulously washing the sand of the river bed in troughs made from reeds. He talks of the need for modernising the gold extraction process to improve the yield and profitability. He also expresses the possibility of finding the actual source of the gold located somewhere in the hills from where it got washed down by the river waters.

The tributaries of the Gumti River meet at the Gumti village in the hills and together flow south to emerge on the plains with the Churan village located on the left bank and Ujjal Majri on the right. The river is thereafter referred to as ‘Ujjal-ki-Nadi’ that flows into the Begna River that itself joins the impetuous Markanda.

Cautley’s Gumti – The River of Gold

Cautley’s letter with the accompanying sketches are reproduced for the readers:-

Note on the Gold Washings of the Gumti River

In the 18th volume of the Asiatic Researches (Physical Class), the occurrence of gold in the line of mountains skirting the foot of the Himalayas has been brought to notice by Captain Herbert, and as in his specification of the points where it has been found, he has drawn our attention chiefly to the Ramgunga, and its tributaries east ward of the Ganges, and has not noticed the tract of mountains upon which the town of Nahun stands, and as in the system adopted by the natives in washing the sand as described in the paper alluded to, there is some difference from that of the Nahun washers, it will be perhaps interesting not only to bring forward this new locality, but also, to show the simple means adopted in procuring the mineral.

The late grand discoveries of organic remains in the hills under Nahun and the consequent desire of prosecuting the inquiry, as far as means would allow, have like many other searches led to the discovery of an object of a totally different nature from that in pursuit, nor may we be far wrong in agreeing with Captain Herbert that the ultimate discovery of gold in abundance in these regions will eventually either benefit some fortunate individual, or else come at once under the eye of the ruling power of the district.

I will, however, enter upon the subject of this note previous to discussing the probabilities of discovering the ore in situ.

The rivers from the beds of which the sand containing the ore is procured, derive their sources solely from this lower tract of mountains, and are not in any way connected with the Himalayas. There does not appear to be any river free from the ore, although many of them are considered by the washers as more abundant than others, and consequently more worthy of their labor, that to which, I shall particularly refer, is named the Gumti river, which leaves the mountains at the village of Churan; Gumti being the name of two villages on the right and left of the stream, about three miles in the interior, at which there is a main junction of tributaries, the river opens into the plains opposite to the town of Sidoura to the westward, and parallel to the Choura Pani and Markunda river, which carry off the greatest portion of the drainage from the hills directly under the town of Nahun.

The gold washers are by no means numerous, and are of the poorest class depending entirely on their trade for support. The Raja of Nahun levies a tax of a masha per annum on each trough, but although there is no restriction to the number of people employed as long as this toll is paid, there does not appear to be any desire or competition on the part of the natives to carry it on, by which we may draw a tolerably accurate conclusion on the returns of the trade, as it now exists.

The apparatus used by the washers consists simply of a trough, a sieve made of the Sirkunda grass, a flat piece of board with an iron edge for scraping up the sand, a plate or dish for carrying it away, and triturating the sand with mercury, and a ladle or spoon made of a gourd, for raising water with these, and a little mercury in the end of a hollow bambu, our gold washer starts on his pilgrimage. I have endeavoured in the accompanying sketch to give some idea of the process, and this will perhaps be clear enough without much explanation. The gold washer in the first instance, examines the soil by washing a small quantity in his hand, the smallest particle or particles of the metal are easily detected, the soil holding the greatest quantity appears to be that in the line upon which, the drainage of the river takes place, for these mountain streams occupy but a small space of their channel during the dry months, or even at any time, with the exception of those periods during the rainy months, when very heavy and successive falls of rain charge every channel with its full supply. 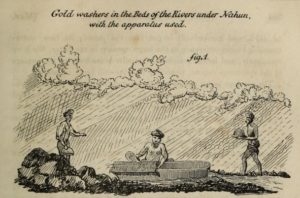 The situation proving favourable, the washer then establishes his trough, 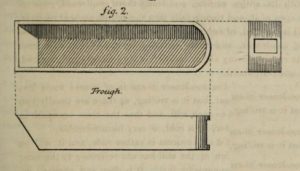 the sand is placed on the sieve and water thrown over it with the spoon,

the coarser particles are thus separated and thrown away, the man still continues pouring water through the sieve over the sand in the trough until nothing remains there, but an almost impalpable blackish powder, in this powder the gold dust is perceptible. This powder is then collected and taken out of the trough, forming a mass capable of being held in both hands, this is triturated with a small quantity of mercury on the dish or basin B,

and the whole is again subjected to a careful washing with the hand on this dish, this latter washing removes everything but a small piece of mercury, and gold in amalgam. The gold washer then lights a piece of cow dung upon which he places the amalgam, and as far as I observed in their manufactories, his labor was repaid by the smallest piece of the precious metal imaginable. The rains are said to be the best and most profitable season, at this period two rupees per day may be the return of one trough under a gold washer and one assistant, the worst day’s produce about two annas, the gold is either sold to the bunias at the large towns in the neighbourhood, or given to zamindars for an equivalent.

There is a great loss of particles of the gold in the system of washing adopted here, many of which must pass off through the trough, there is also a total loss of mercury, the latter might be easily remedied, we should imagine, were the washers in the habit of giving the amalgam to their employer who might complete the processing in close retorts. It is evident that under the eye of an active and interested person, a trade might be carried on here of a description, by no means contemptible, a much greater quantity of the mineral might be procured, and that on the adoption of a trade in the article, an improvement of the apparatus might be effected, tending much to that point.

I have much pleasure in sending you three packets.

No. 1 containing the sand as found in the bed of the river,

2 the black powder the result of the first washing in the trough,

3 the gold ore and shall hope to see your note on the quality as well as the natural state in which the ore exists, it would appear from the account of the washers that lumps or larger particles than those sent are not found, although it is by no means an easy matter to get correct information on points of this sort.[1]

That the gold exists in any other shape than that of the present specimen, in these lower mountains, is very improbable. The particles may differ in size, and we may in all probability detect the stratum containing the gold dust, and so procure it before it has undergone further attrition in the river’s bed, but we must look to the Himalayas themselves for the auriferous strata, from the disintegration of which, the sands of these lower hills have been supplied with the mineral. Captain Herbert alludes to the occurrence of the ore having been traced up to a certain point in one of the tributaries of the Ramgunga, a fact corroborated by Mr. Ravenshaw the Civil Service in a note to the Society. My inquiries establish a similar limit in the Gumti river, this is a point, however, that would require very careful examination and that examination under the eye of an experienced person, who after all, in such a maze of mountains and rivers would perhaps have to depend upon chance for successful prosecution of his labors.

The occurrence of gold in alluvial soil is common to every quarter of the globe, although South America and Africa provides the greatest supply of commerce, and in all probability there is no extensive chain of primary mountain that does not charge its drainage with the mineral in question.

Its incorruptible nature, and it’s not being subject to the effects of oxidation from common causes, is a sufficient reason for the presence of this mineral, unaccompanied by others. With regard, however, to the Nahun and Ramgunga gold, we are perfectly decided on one point, viz. that the rivers bearing the dust have no connection whatever now with the great Himalayan chain, and therefore that if the mineral exists in abundance at any one point, it will be found in the hills from which these rivers derive their sources, and it is to be hoped, that we may even look forward to the ultimate discovery of gold, in comparatively as great abundance, as the present fossils, the existence of which, six months ago, would have been as much doubted as, the possibility of finding gold now may be.

[1] These have not yet reached us. The black powder is, however, doubtless similar to that which accompanies the gold dust in the rivers of Assam and Ava, for the most part magnetic oxide of iron. Platina may also be found in it, but rarely. The use of a strong magnet would perhaps prove advantageous before rubbing in the mercury for amalgamation.

1 thought on “Gold washers of Nahan”