Sonkadi (Pentanema indicum) is a herb of the ‘Sunflower family’ that grows up to 1 metre tall. It has attractive, yellow flower-heads with 12 to 24 ray flowers (petals). Leaves are lance-like and stalkless. It is found on grassy slopes of the Himalayas. 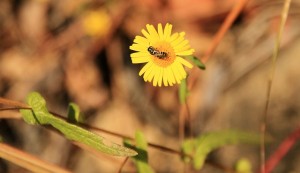 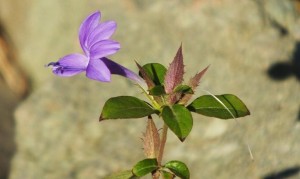 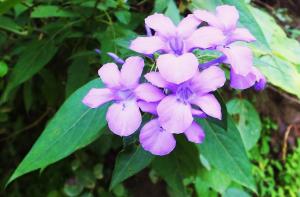 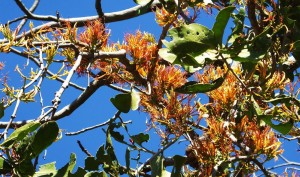 Silver Cockscomb/Flamingo Feathers (Celosia argentea var. spicata) – an attractive flowering shrub with slender upright stems (up to 2 feet in length) and lance-shaped leaves. The tiny flowers are borne on erect, cylindrical spikes (reminiscent of wheat spikes) that are a glossy silver-white at the base and pink at the top. Is popular as a potted plant as well as a dried plant. 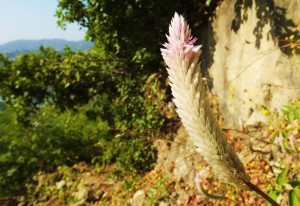 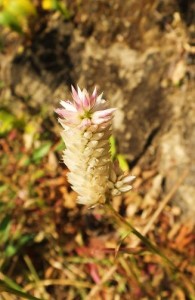 Teak/Sagwan (Tectona grandis) a large deciduous tree with small, white fragrant flowers and large ovate, papery leaves.  It bears flowers in pannicles during monsoons and small globose fruit thereafter. The tree is leafless during winter months. Timber is hard, durable, termite resistant , with tight grain and good texture.This makes it popular for making furniture. Teak trees have been planted extensively by the forest department in Morni hills along the roads. Trees have also been planted deeper in the forests along forest tracks. An impressive plantation by the Haryana Forest Department can be seen at Berwala. A decade old private plantation at Gajhan, Bhoj Balag shows the increasing popularity of the tree. 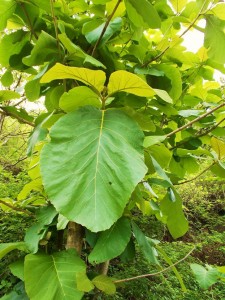 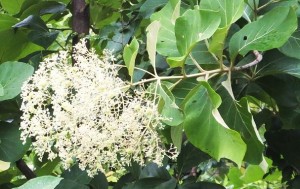 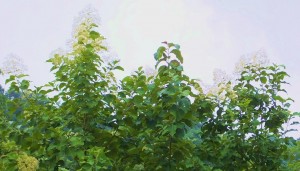 Lion’s ear/ Christmas candlestick/Bara guma in Hindi (Leonotis nepetifolia)-an erect, tall, stout annual herb that is native to tropical Africa. It is commonly found on roadsides and on degraded land. It can grow upto 3 metres tall and the stems are four-angled. It has whorls of striking lipped orange flowers that are borne in rounded, spiny clusters. The stems appear to spike the orange clusters through the middle and new flower clusters grow on the stem above the older ones. It has soft, cordate, lush green serrated leaves. It grows gregariously often dominating the area. Its flowers are pollinated by bees and sunbirds. It gets its name ‘lion’s ear’ from the shape of its orange, furry, tubular flower. 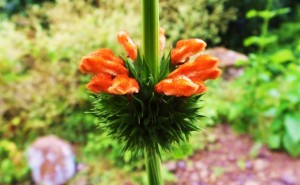 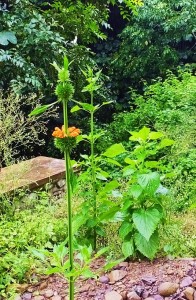 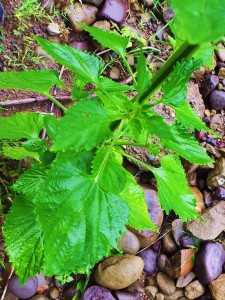 Yellow Nicker/ Grey nicker/ Nickernut/ Bonduc nut/ Fever nut /Kantkarej or Kantikaranja in Hindi (Caesalpinia bonduc)- the ‘Nickernut’ is a large, thorny, straggling, leguminous shrub which behaves like a strong woody climber, taking support of trees. Plants generally start as a single stem arising stiffly upright from the ground that curves into a more horizontal direction after a few feet.  The branches are armed with hooks and straight hard yellow prickles. Leaves are large, double compound and armed with prickles.

Racemes of small yellow flowers are produced in the leaf axils, followed by clusters of spiny, two-seeded pods.

‘Nicker’ is an old English (Dutch?) name for ‘Marble’. The prickly inflated pod has 2 glossy, marble-like, green coloured seeds that turn grey on maturity and are used for making jewelry. The sub-species that produces grey seeds is called Grey nicker and that which produces yellow seeds is called Yellow  Nicker!!

The seeds yield bonducin, that is called the poor man’s quinine and is used to treat malaria and hence the name ‘Fever’ nut. Seeds yield a fatty oil that is used as a cosmetic and for treating ear discharges.

The shrub is native to the Caribbean islands and tropical beaches where it grows in dense thickets. The marble-like seeds can be seen scattered on the beaches and can easily be mistaken for bird eggs. The seeds are buoyant and tough and are dispersed over large distances by ocean currents! They are also known as ‘sea-pearls’ (Sagar Goti in Hindi!). The seed has concentric lines in relief on the seed coat and cause the nut to ‘burn’ when rubbed against clothing. Caribbean kids apply the ‘burning’ nut on the skin of unsuspecting victims to amuse themselves!!

The leaves, bark and roots of the shrub are used for preparing different Ayurvedic formulations for treating  jaundice, cough, fever, cough, worms and diabetes.

In India, the shrub grows in coastal areas and on the edges of mangroves. It also grows in disturbed areas upto elevation of 850 metres. It prefers open, sunny locations. 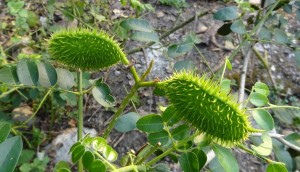 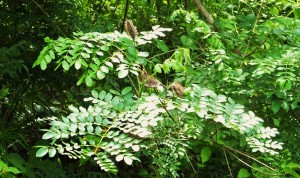 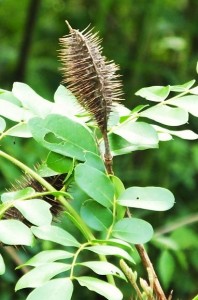 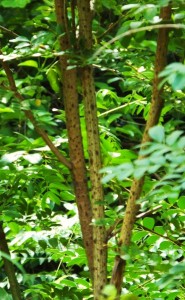 Lead tree/ Subabul (Leucaena leucocephala) is a low, shrub-like, fast growing, thorn-less tropical tree that grows well under sunny conditions. The tree prefers well drained soils. It is drought tolerant as it has deep roots. It can tolerate a wide range of soils – acidic, alkaline, dry-clayey gravely soils. It can grow on sharp slopes.

It is native of Mexico and Central America and has been introduced all over the tropical world through afforestation and agro-forestry projects. The lead tree is a source of fuel wood, high-protein cattle fodder and biomass. It is planted as a wind-breaker, for checking soil erosion and for its nitrogen-fixing properties. Experiments by social-forestry and animal husbandry departments in Tamil Nadu have shown that biscuits prepared from subabul leaves add to the nutritive value of animal feed. And cattle are said to prefer the subabul biscuits to subabul leaves!! Scientists have noticed that the nutritive value of leaves of sub-species that have lower seed production is better. 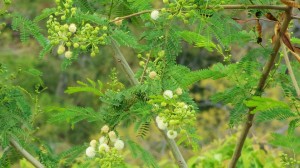 Leaves of the lead tree are bi-pinnate with 10-12 pairs of oppositely arranged leaflets.  Its spherical flowers are white and turn brown with time. The flowers grow in clusters on ends of branches.

The seed pods are long and flattened and turn brown on maturity. The pods twist and open to reveal neatly stored oval, glossy brown, flat seeds. The lead tree is a prolific seed producer and poses the danger of becoming an  invasive species by forming thickets that crowd out natural vegetation. Seeds are dispersed by birds, rodents and cattle. The young pods are eaten in Japan and Thailand. 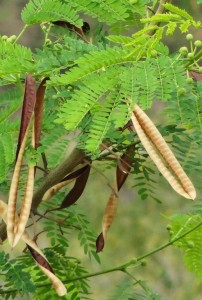 Himalayan Mimosa/Shiahkanta (Mimosa rubicaulis) is a large straggling prickly shrub of the Himalayas (300 to 2000 metres) that blooms during the monsoons. The globose flowers are an attractive pink that gradually fade to white. Leaves are double-compound, each leaf having about 10 pairs of pinnae, each pinnae having about 20 pairs of pinnules. Pods are thin, flat and curved. It is planted as a thorny hedge for the fields. The red heart-wood is used for making posts for fences, pegs for tents and gunpowder charcoal. Roots and leaves are used medicinally. 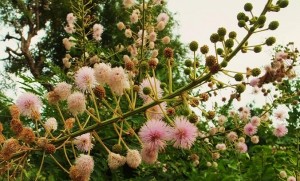 Calamintha – a shrub of the mint (Lamiaceae) family that is native to Europe, Asia and America. There are several species and sub species in the genus ‘Calamintha’. Calamintha nepeta (Lesser Calamint) is a beautiful Mediterranean perennial shrub with upright stems and small, glossy green fragrant leaves that attract hummingbirds, honeybees and butterflies with their mint like aroma. The heart-shaped/ovate leaves are toothed at the edges and are used in Italian cuisine. The shrub produces a cloud of tiny lipped pale lavender flowers in August. The Calamintha species found in Morni hills is much like its Mediterranean cousin, the Lesser Calamint, but its leaves are more velvety with tiny white hair at the edges and its flowers are yellow in colour, instead of lavender blue. 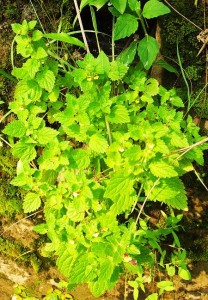 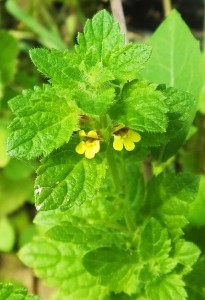