‘The Fall of a Sparrow’, is an autobiography by Salim Ali and was originally published by the Oxford University Press in 1985. An illustrated adaptation that incorporated some interesting black-and-white pictures from Salim Ali’s collection and also the drawings of birds by famous artists was released by OUP in 2007. It was this later illustrated edition that recently caught the Tramp’s eye in a book store and it was decided to begin the series on the ‘Travel and Shikar Books’ with this compelling account of the life of a compulsive wanderer.
The author’s honest confession that bird-watching was only a pretext for spending time away from the madding crowd in the midst of nature and changing landscapes conveys the essence of the story of his life. Salim Ali, was India’s most renowned birder and his influence on the following generations of home grown ornithologists and naturalists is unparalleled. He was a trail blazer and he took to ornithology when the field was virtually the exclusive preserve of the white sahib log. The book is a narration of the adventures of this restless, energetic man. The writer’s exceptional flair with the English language as he describes places, people and experiences cannot be possibly missed and it makes the colourful narrative all the more interesting and enjoyable.
The tale begins in the early 20th century ‘Bombay’ that was still rather quaint and green and was yet to be overwhelmed by the advance of industrialization. Ali describes the memorable school journeys on horse-powered carriages. The thoughtless ‘hunting’ expeditions to the city forests with his BB air gun and the triumphant march back home with a rich bag of dead sparrows. The young ‘believer’ would then faithfully slit the throats of the poor dead birds in token observance of the edicts of religion, before preparing himself a delicious meat dish!
It’s the story of a journey that took him to places far and wide and Ali offers interesting glimpses of his life through anecdotes that spice the somewhat rambling account of his restless wanderings. Thus you read about the reckless Sardar driver in Afghanistan who could put the fear of God in the bravest of men. The soccer match in England. The flamingo ‘city’ in the Rann of Kutch. The brush with bandits in Tibet. The eccentric but talented, Meinertzhagen, who found our dear hawk-nosed birder, ‘hideous’ looking. The idyllic motorcycle tour of Europe on his ‘Sunbeam’. The thick forests of Burma. The early beginnings of the Bombay Natural History Society and his encounters with some of the pioneers of natural history in India like Hugh Whistler and S.H. Prater. The bird survey in Hyderabad. The last ditch efforts that saved the Bharatpur Bird Sanctuary. The missed opportunities. The people who helped him and partook in his ventures. His sharp reactions to the subtle and sometimes not so subtle racism of the Colonial times. 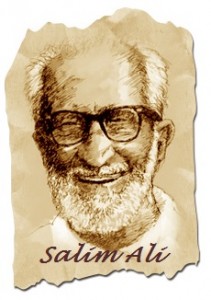 The chronology does get mixed up at times, which is understandable, as he wrote the book when he was 85! The timing of the autobiography also tells you a lot about the man. He was riding a motorcycle till the age of 68! He was not the one to call it a day while there was still some wind left in him. An indefatigable man, who lived his life to the full, till his very last breath. At the sunset of his illustrious life and career he had only one regret- of not having owned a BMW motorcycle!! 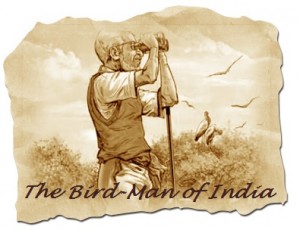 A Confession: The pictures have been somewhat shamelessly borrowed and adapted from the eBook ‘Dr. Salim Ali – The bird man of India’ by Amna, Y. Al-Marzouqi (2012) to give a feel of this incredible man.

The publishers of ‘Amar Chitra Katha’ have recently released a comic book on the life of Salim Ali to inspire the kids with his life and contribution.