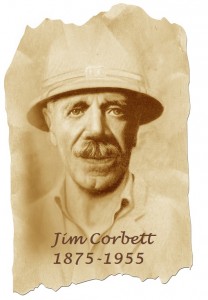 Edward James (Jim) Corbett was born to English parents in 1875 at Nainital. His father was the postmaster of the town. The family owned a cottage at Kaladhungi, a picturesque village on the eastern fringe of the national reserve that Jim eventually helped to establish to save the magnificent Bengal tiger that he had so ruthlessly hunted all his life! The quintessential ‘White Shikari’ of the colonial era, Jim had his own code of conduct for hunting. He held the rank of a colonel in the British Indian Army and his services were frequently requisitioned to hunt down man-eating tigers that terrorized the hill-dwellers. He was a legend in his times in the Kumaon hills for his hunting prowess but is today remembered for his efforts at saving the tiger at a time when the subject of conservation was little understood. 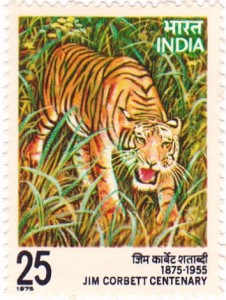 He wrote six books at the end of his hunting days that were published by the Oxford University Press. Some of them are considered the ‘must read’ shikar books and ‘The Tramp’ decided to review them for his readers. 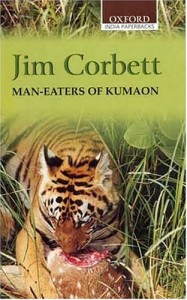 It saddens one to think of the mindless destruction of our wildlife heritage by legends like Corbett. Equally saddening is the wanton destruction of virgin forests for feeding the British Empire’s hunger for timber. Thus as trees get chopped by hundreds of government hired woodmen, Corbett Saheb stands guard to save them from the vengeful man-eater who helplessly watches his habitat getting swallowed by the glory of the Empire.
A question that nags the reader is that when did Jim Corbett meet his Kalinga? Which was the moment that triggered the realization that killing of beautiful wild cats was not quite as brave or noble as he had been led to believe by successive generations of men. That the new age rifles of the 20th century, had tipped the balance unfairly in favour of man. That hunting was a competition no more. That it was more of a systematic and mindless purging of wildlife. The unmistaken admiration and detail with which he describes the magnificence of the 10 feet 11 inch long, Bachelor of Powalgarh, does lead the Tramp to speculate that its killing in 1930 might have been the turning point in Corbett’s hunting career. That the seed of conservation was sown and remorse finally overtook the man eight years later when he hung up his hunting shoes and switched from the rifle to a camera as his favoured weapon of choice. The book ends with how Corbett moved on to hunt with the camera which was decidedly more challenging than hunting with the gun. A peek into the life of the modern day nature enthusiasts and wildlife researchers would easily confirm Corbett’s late in the life discovery. It takes more than a man to go scouting for tigers without a weapon, relying only on the knowledge of the tiger’s behaviour and its habitat to stay out of harm’s way.
On the whole the book is an interesting read for the shikar and nature enthusiasts. It is particularly interesting for those who have trekked through the dense sal forests of Kumaon and Garhwal hills with their quaint forest rest houses and picturesque villages that find a mention in Corbett’s hunting and travel accounts.

1 thought on “Books by Jim Corbett”