Prior to the partition of 1947, the British-Indian province of Punjab had Lahore, the magnificent City of Gardens of the Mughals as its capital.With the partition and creation of India and Pakistan, the western part of the province and the city of Lahore went to Pakistan. India then built its first modern planned city as the new capital of east-Punjab and named it ‘Chandigarh’.

Chandigarh or Chandi-ka-Garh, literally means the fortress of goddess ‘Chandi’ . The name is taken from a modest 19th century stone fortress built atop a hill near Pinjore by the Rajas of Manimajra. The fortress commanded a minor hill pass and overlooked the floodplains of Ghaggar river to the south as well as the Morni hills of the Meers of Garhi-Kotaha that lay beyond. The construction of the fort is generally attributed to Raja Bhagwan Singh who ascended the throne of Manimajra in 1866. The fort is, however, likely to have been built much earlier as it finds a mention in a travel account of Mr.William Moorcroft and Mr. George Trebeck who crossed the area in 1820.*#   The fortress today lies in a state of ruin and is locked to the visitors. The charm of its 200 year old history is all but lost to the semi-finished modern red-brick structure that has been thoughtlessly built inside this historical fortress. One can spy a small temple and some rock carvings inside the locked premises.

* Travels in the Himalayan Provinces of Hindustan and the Panjab, in Ladakh and Kashmir; in Peshawar, Kabul, Kunduz, and Bokhara (Vol I); Mr.William Moorcroft and Mr. George Trebeck (1841)

# Gharib Das was the founder of the Manimajra family and with the fall of the Mughal Empire in the 18th century, he seized the 84 villages that were in the charge of his father Ganga Ram who was a revenue officer under the Governor of Sirhind. He also briefly held the fort at Pinjore. He died in 1783 and his elder son Gopal Singh was conferred the title of ‘Raja’ for the services rendered to the British in the campaign against the Gurkhas. Gopal Singh was succeeded on his death by his son Hamir Singh in 1816 who was followed by Govardhan Singh. Gurbaksh Singh ascended the throne in 1847 and it is generally believed that it was during his reign that the Mata Mansa Devi temple was constructed at Manimajra. Govardhan Singh was succeeded on his death by his brother Bhagwan Singh in 1866. 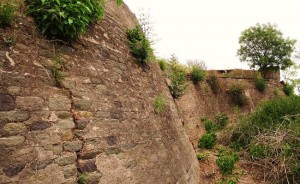 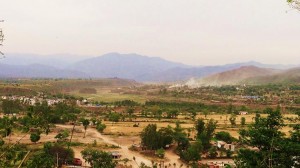 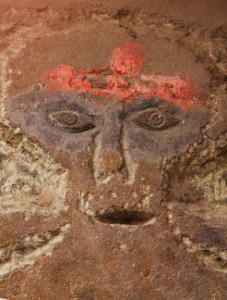 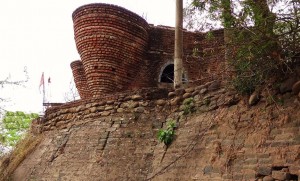 The fort lies at the edge of the Chandi-Kotla village. The village has a curious twin-towered temple dedicated to the goddess. 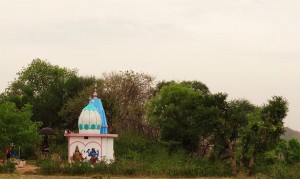 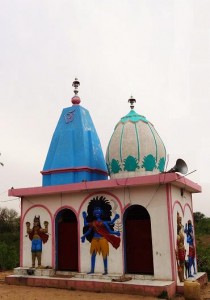 The visitor to this temple cannot possibly help feeling intimidated by the rather ominous looking idol of the deity draped in a black sari that depicts the goddess at her belligerent best! 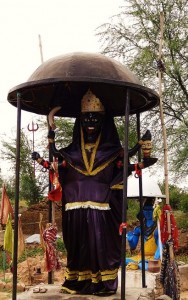 Idol of Chandi at Chandi-Kotla

To the southwest of Chandi-Kotla on the plains below the hill lies the village of Chandimandir. A rather modern looking temple dedicated to Chandi has been built on the outskirts of the village by the side of the Kalka railway line. 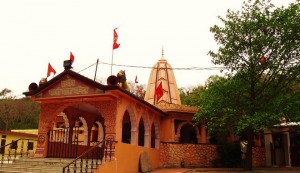 If one were to go by the claims of the temple pujaris, the Goddess slayed Mahisasura at this spot over 5000 years ago. It is claimed that the first President of independent India, Dr. Rajendra Prasad visited the temple in 1953 along-with Sir C.P.N. Singh, Governor of Punjab and Sh. K.N. Katju the Defence Minister of India. That he was so impressed with the ancient past of the temple that he named the local police station, railway station and the adjoining village ‘Chandimandir’ after the ancient temple! Furthermore it was decided to name the upcoming capital of Punjab after the hill fortress of Chandi, that overlooked this temple!!